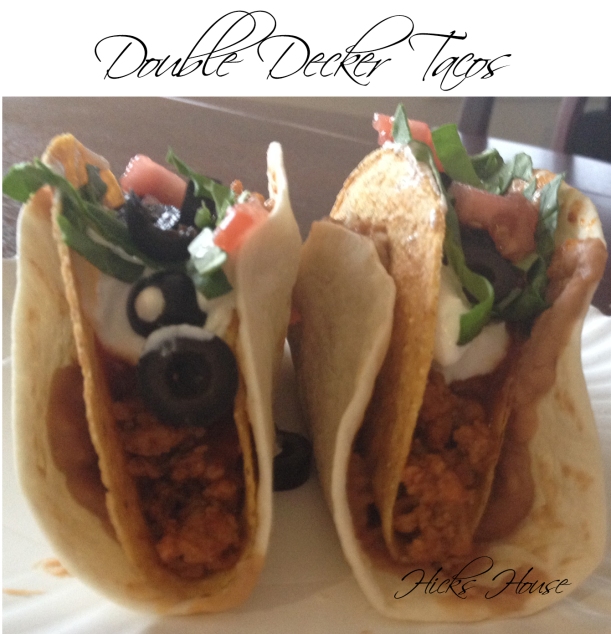 Have you ever had a Double Decker Taco? Perhaps you have at Taco Bell – I used to eat them there all the time back in the day. For me it was an easy step to take the idea and apply it at home, however I find that whenever I talk about it, the idea hasn’t occurred to most people. When Ken and I first started dating I suggested making them for dinner one night and he looked at me like I had lost my mind – flash forward 30 minutes and crazy had turned to genius. In fact they are so good that whenever we have a planned Taco Night we both look forward to it like giddy school children.

So this isn’t a recipe per se but rather a new way to make something you may be making already. So this what you need:

Put your refried beans in a small saucepan and heat on medium low while you prepare your taco meat. The kit we generally use comes with a seasoning mix, however we have bought others that give you extra taco shells instead and then you have to buy it separately.

The real magic is in the assembly. Take your warmed tortilla shell and spread your refried beans over the entire surface.

Then place your hard shell in the middle and wrap your tortilla around it. (I did take a picture or this step but it came out super blurry) Fill your taco as you normally would – if you put the cheese on the bottom it will melt a bit when you top it with the hot taco meat.

Then enjoy the best taco you’ve ever had!

It’s that easy! I hope you enjoy as much as we do!